The updated version of the charity rating system consists mainly of changes made to Charity Navigator's financial health rating metrics. They will not affect measurements for accountability and transparency, which comprise the second major ratings category.

Along with Guidestar, Charity Navigator is one of the more influential charity assessment organizations, rating about 8,000 charities.

As first reported by The New York Times, this new methodology was developed in consultation with industry leaders, academics, Charity Navigator's financial measures task force, advisory panel, donors, and staff, as well as from the results of a survey sent to the thousands of organizations that they evaluate.

Charity Navigator's goal was to develop a set of financial rating metrics that meet the needs of both donors and charities while remaining consistent with their initial unbiased, objective, and data-driven approach to rating charities.
While about 75% of charities will not see a change in their star ratings as a result of the new system, the revisions will help Charity Navigator present a more accurate portrait of the fiscal status of the nonprofit organizations it evaluates.

About 19 percent of charities saw their ratings go up, while about 8 percent went down. Fourteen charities had their rating increase by two stars and only two nonprofits – Law Enforcement Legal Defense Fund and National Police Defense Foundation – had a two-star rating decrease. 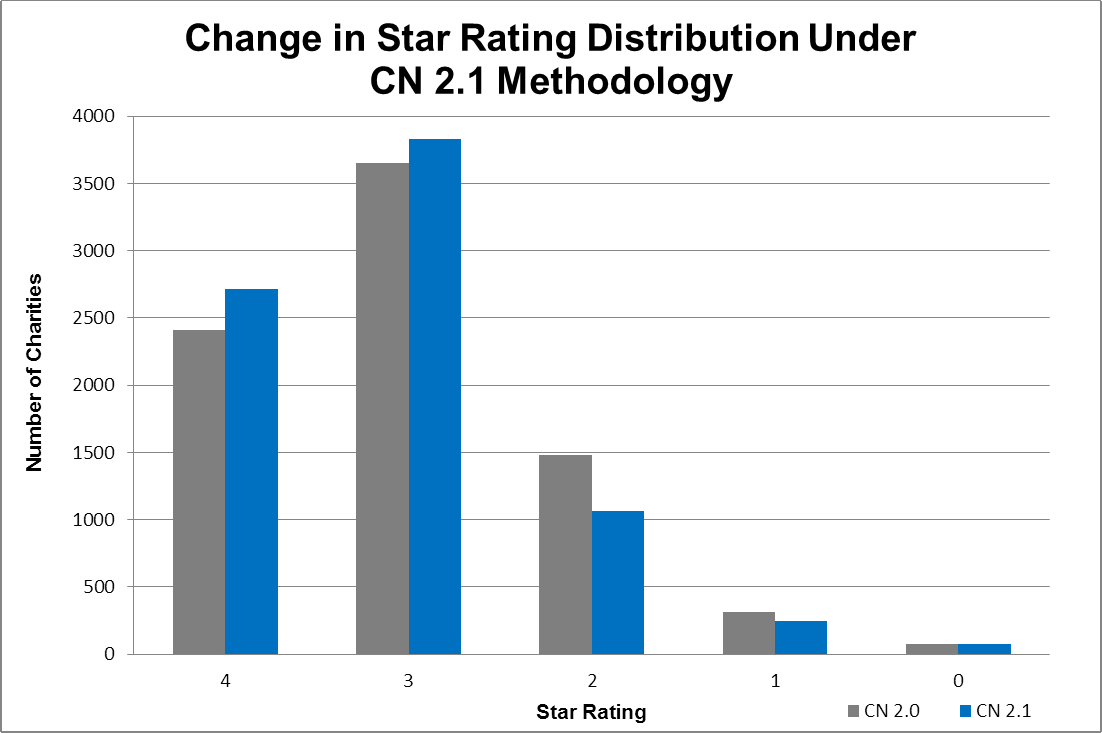 Under the new CN 2.1 methodology, about 27% of the 8,000 rated charities received a new star rating.
Key changes include:

If a charity spends less than 33 percent of its budget on programs, it automatically would receive a zero for its entire financial score (half the rating). Under the new ratings, that remains the same but if an organization spends between 33 percent and 50 percent on program, it would receive zero out of a possible 10 points for its program expense.

As part of their own evaluation, Nonprofit Quarterly reports that "overall, the new system seems fair and offers a more accurate picture of the health of an organization, which is exactly what Charity Navigator was aiming for."