Nowadays, instead of getting our news the old-fashioned way — 60 Minutes, anyone? — media outlets are now emitting bursts of information through updates of 140 characters or less.

According to research by Thales S. Teixeira at Harvard Business School, consumer attention -- and by association, donor attention -- has been a rapidly deteriorating situation for decades.

A 2005 report from the New York Times cited by the HBS study explains:

This struggle to get noticed is even more difficult for nonprofits, who are competing for wallet share (and in this case, "eyeball share") with retailers, other nonprofits, and a host of other attention-grabbers.

On the other hand, it is said that a picture is worth a thousand words. At an average speaking rhythm, it would take over 7 minutes to recite those 1000 words. So instead of taking 7 minutes — or even 30 seconds for a standard elevator pitch — use visual messaging to grab donors’ attention and ensure your message gets delivered. The first step to making a memorable impression on donors in a direct response campaign — whether by e-mail or by post — is to have a unique and memorable logo. Your logo should reflect your nonprofit’s values and convey its mission in an instant.

This is particularly significant if the aim of your nonprofit is to reach millennial donors. Because donors in their twenties and thirties value impact over branding, use visual content to tell the story of how their gift will be used, i.e. a donation of $30 feeds a family of four for a week, or a gift of $10 means one solar-powered water purifier for a mother in need in a developing country. To drive this message home, show how much a week’s worth of food is, or how the portable water purifier works. Donors in general and millennials in particular appreciate being shown the concrete and tangible effects of their philanthropy. However, while the dynamic of advertisers and news outlets is one of end-user benefit (i.e. here’s information for you, here’s a product that will help you, etc.) non-profits are essentially asking for the donor’s wallet share with rarely a tangible “net positive benefit” to the donor.* When it comes to viral posts, images and videos are neck-and-neck. (And often, they complement each other as well. Still shots inserted into videos and animation added to static images, often called anigifs, can become powerful tools in your visual arsenal.) According to Marketing Insider Group, “[posts] with images get 94% more views than those without. And posts with videos attract 3x more inbound links than plain text posts.” The key to gaining traction with branded images is consistency. If your images and messaging are inconsistent with your nonprofit organization’s identity, your fans and followers will notice the disconnect and have difficulty engaging with your nonprofit. Another way to encourage a consistent visual message is to choose a hashtag and stick with it for the duration of a campaign so that your supporters can join the conversation and add their voices to your message. Prompt your donors and friends to upload photos of themselves using your designated hashtag. Studies have shown that when these types of posts up in their friends’ news feeds and timelines, they garner many more overall comments, likes, and shares, than text posts.Social Good Summit‘s #2030NOW is a great example of that push. The hashtag is a nod to the United Nations’ 17 Sustainable Development Goals project and its anticipated deadline. At one point, the hashtag was even the top trending topic in the United States. Take a look at a visual summary of the opening session in tweets, photos, and videos at Mashable’s blog: 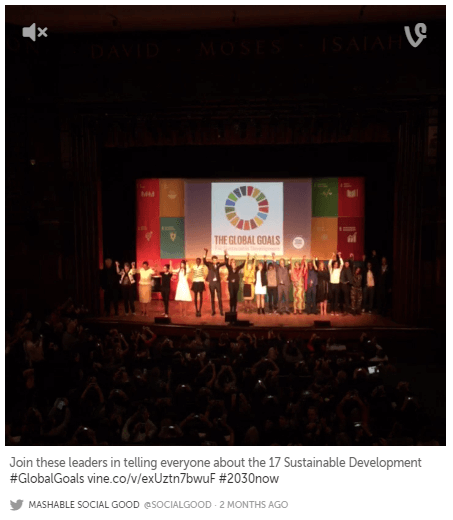 Mashable: #2030NOW trends nationwide on the first day of the 2015 Social Good Summit

When it comes to videos, it helps to take note of which animated advertisements you yourself are likely to watch or skip. A recent report claims that the first 5 seconds are critical. If your video is mis-branded or off message, your potential donors will skip over it without a second thought.

YouTube's 5 second "pre-roll" ads are conditioning consumers (and donors) to expect a different type of ad. On-demand video services like YouTube, Netflix, Hulu, and others are giving viewers more control over what they will and will not choose to watch, when it comes to entertainment as well as advertising.

As always, test and tweak. Find out what your target demographics are drawn to using AB testing to give donors more and better reasons to contribute!

*Although lower taxes, donor appreciation gifts, and public recognition could sometimes fall under this category, they do not impart as much benefit as they consume and are not highly cited gift motivation reasons by donors.