Donors will tell you how they want to give. Your nonprofit needs to listen.

Before I ever began to realize my dream of helping nonprofits become lean, mean fundraising machines, I worked in the marketing department of a large publishing company that distributed to hundreds of markets nationwide.
When I joined the company, they were in the process of converting the advertising for these publications (a.k.a. the business bread-and-butter) from print to digital.

Now, this did not mean the company was "starting to shift from relying on print ad revenue and beginning to focus more on web banners and email marketing"…

I mean that one day, the advertising sales representatives were telling clients, "Buy print! Print is hot! Reach a bigger audience with print!"

And the very next day, the sales reps were calling back those same clients and saying, "Print is dead! It's outmoded, outdated, ineffective. Long live digital advertising!"

So these valued customers took their longtime sales reps at their word, promptly canceling their print ad contracts, and immediately signing up for digital advertising instead.

However, it wasn't long before company executives realized they'd made a huge mistake.

Because of digital advertising's low overhead, it was cheaper for the clients. And because it was cheaper, that meant the steady stream of print ad dollars turned into a miserable trickle.

Once the execs realized that revenue had sunk so low that they could not even fund the actual print-to-digital transition itself, they did the ugly, awful, horrible, terrible thing.

They called their clients back and they backpedaled. Boy, did they ever. I can still hear the reluctant calls those cringing sales reps were forced to make.

"Hi Jimmy! Yeah, the kids are great. Hey, remember how I said last week that print was dead? Haha! Yeah, about that..." Ouch!

With no interim procedure for maintaining cash flow during the print-to-digital transition, those charged with spearheading the company's bright new digital future instead aimed it straight for an inevitable—and in hindsight, completely foreseeable—disaster.

And too often, we see nonprofits do the exact same thing when it comes to giving.

Failing to plan is planning to fail

Nonprofits, like many other organizations, fear change. Change can often be scary, particularly because it carries an inherent risk of failure.

But you know what is even scarier? Missing the signs that danger lies ahead on your current path and your nonprofit is headed toward unnecessary hardship.

Many nonprofits, who are simply doing the best they can with what they currently have, wind up relying on a short-sighted approach. Instead, nonprofits should be looking ahead and planning for the future.

One example of the need for forward-thinking is the matter of payroll deductions. Many nonprofits who rely on federated giving tend to make payroll deduction the backbone of their campaigns.

A decade before President Richard Nixon announced that the Combined Federal Campaign, or CFC, would become the uniform fundraising method for the federal service, President John F. Kennedy signed an executive order allowing health and welfare agencies to receive gifts from federal employees via payroll deduction.

Payroll deduction was then widely viewed as a hassle-free way for federal employees to make pre-tax donations to the charities of their choice. Even throughout the legislative hurdles of the 1980s and the growing pains of the 1990s, CFC was "it" as far as charitable giving by federal employees was concerned.

CFC payroll deduction continued to grow from its inception in 1971 until reaching its peak at $282.6 million during the 2009 campaign.

Then, contributions began to decline.

Let's take a closer look at the total CFC giving since 1994: 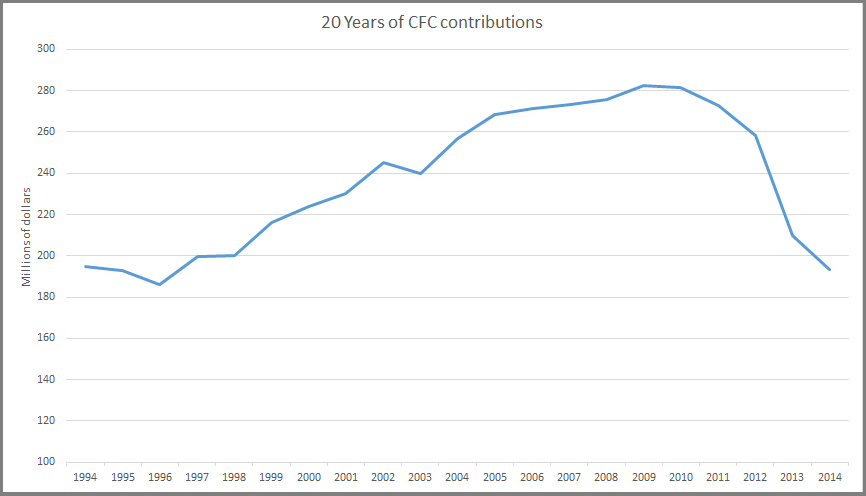 What's more, according to OPM's CFC 50 Commission report, the overall decline in total contributions does not even tell the whole story.

In recent years, total contribution amounts per donor have actually been going up. However, fewer federal employees are choosing payroll deductions through CFC as their primary method of giving.

In fact, so many federal employees are opting out of the CFC altogether that the increased giving from individual donors can't make up the shortfall.

From a peak of over 80% in the 1960s, participation rates fell below 24% as recently as 2011, the last year for which these statistics are available. If the downward trend continued at the same rate as previous years, total CFC participation should be hovering around 18% today.

So what happened to payroll deductions? Technology.

As more Americans began to own personal computers—and more recently, smartphones—payroll deduction was no longer the only game in town. These days, it's easy to visit a nonprofit's website after reading a news item on Twitter, click "Give Now" and feel like you're making a difference in real time.

Rather than allotting a set amount from their paychecks at the beginning of the year and hoping the charity uses it wisely, donors want be more connected to the impact of their gift. Now all donors need to do is perform a brief web search to learn about the nonprofit's mission, expenses, and anything else they might like to know.

Think of it this way: instead of the Pony Express, nonprofits need to be the telegram. Or better yet, the smartphone.
Another important aspect to consider is the question of what happens to payroll deductions when employees leave the company.

If the nonprofit's only interaction with donors is through their workplace, once that person is no longer an employee, the nonprofit loses contact with the donor for good.

That is why it is absolutely critical for nonprofits to build strong relationships with donors beyond the workplace campaign so that they will want to continue working with—and giving to—your nonprofit organization long after they have moved on to another company.

Does this mean that nonprofits should write off payroll deductions forever? Of course not!

The key is that these nonprofits do not put all their fundraising eggs in one basket. Payroll deductions might be a smaller basket, but it can still hold some eggs, so why not keep it around?

And it is important to note that not all workplace giving campaigns are like the CFC. It just so happened that their recent report perfectly illustrated the danger of relying on a single giving method to stay afloat.

Even though donor giving habits are shifting, nonprofits should formulate a plan to keep operations running smoothly during the transition to different giving methods. This avoids the need to backpedal like the aforementioned "print-digital-print" sales reps.

Protect what works for your nonprofit while you evaluate your donors' giving habits and develop new strategies moving forward.

StratusLIVE helps nonprofits move from transaction-based giving to relationship fundraising. As we've seen, motivational interests are top-of-mind for modern donors and nonprofits can no longer rely on the assumption that donors will give in the manner they've always done just because it's easy.

Contact us or simply request a free demo to find out how StratusLIVE can help your organization prepare for the future.